In this article we argue that Libra would be in the top 3 crypto currencies almost overnight. As of today (end of June 2019), Bitcoin is capitalized at USD 190 billion. It can be assumed that — depending on assumptions — Libra would quickly reach a market capitalization of USD 250 billion in Q1 2020. This would also make Libra a significant buyer of government bonds in a relatively short time frame, as Libra would have to purchase large volumes of financial assets such as government bonds to ensure coverage of the Libra tokens.

The role of government bonds for Libra
Libra is designed as a stable coin and is supported by financial assets, the so-called Libra reserves — consisting of bank deposits and short-term government bonds issued by stable economies — in order to reduce volatility and promote confidence.

The public debate about Libra has so far mostly overlooked the fact that the Libra Association could thus become a major buyer in the government bond market. Every Libra token must be covered by the Libra Association: through bank deposits or short-term government bonds. Assuming that 250 million people would become Libra users and each user would own a Libra worth USD 1,000.00, Libra would have a market capitalization of USD 250 billion (see Table 1, dark yellow cell). This would make Libra one of the top 3 crypto currencies virtually overnight. As of today (end of June 2019), Bitcoin is capitalized at USD 190 billion. However, an exact estimate of the number of users and the Libra held is not possible currently. Rather, a possible user base of 100–500 million people, each holding between 500.00 and 2,500.00 USD in Libra, could be assumed. This would result in an expected market capitalization ranging between USD 50 billion and USD 1,250 billion (see Table 1). It is a fact that Facebook currently has 2.7 billion users in its applications Whatsapp, Instagram and Facebook Messenger. Therefore, the estimation that 250 million of them would become Libra users (about 10%) is not unrealistic. 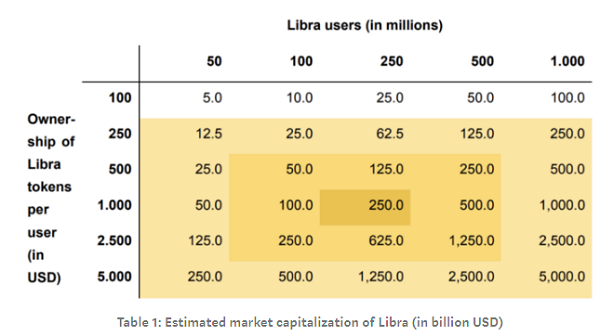 In this respect, the expected market capitalization of Libra is relatively high compared to the volume of short-term government bonds. The supply of government bonds would have to be increased to meet demand. Accordingly, governments could now borrow cheaply and place billion-dollar bonds, knowing that the Libra Association will act as a buyer. In any case, Libra would become a significant buyer of government bonds in the relatively short term, as illustrated by the above figures.

Depending on the decision-making process within the Libra Association, it could in principle also stop buying bonds from certain states. While this may seem speculative, governments may even become dependent on the Libra Consortium. The reason for a possible, very high level of this dependence is ultimately the sheer size of the user community, which — due to the construction of the consortium — could also quickly become real users.

“Financial inclusion” as one important goal of Libra

On 18 June 2019, the whitepaper on Facebook’s “Libra” project, a novel crypto currency, was published. First information about the vision, the goal and the implementation of the project were explained here.

Facebook’s main goal is to provide an infrastructure that enables payments to be processed quickly, easily and cost-effectively worldwide. At the core of the project is a crypto currency called “Libra”, which is based on a distributed ledger technology (DLT), the “Libra Blockchain”, to be made accessible mainly via mobile phones. The project has the potential to significantly reduce transaction costs — especially for cross-border transactions for hundreds of millions of people in developing and emerging countries. Today, intermediaries often charge about 10% of the transaction volume as fees. According to the white paper, 1.7 billion adults worldwide are currently excluded from the financial system (31% of the world’s population). However, two thirds of them have mobile phones with Internet access. Thus, the Libra Token could create an infrastructure to make payments via smartphone — without access to banking services — and to enable participation in general payment transactions (“financial inclusion”). In the event that the Libra Token is used in established networks such as Whatsapp and Instagram — with their hundreds of millions of users — acceptance would be possible in a short period of time. Hundreds of millions of users could be reached through existing and established forms of digital social interaction.

Governance of Libra as problem and risk
However, the Libra project also raises issues of centralisation, data security and regulation. Facebook decided to give up power in order to act on an equal footing with all other partners in the entire Libra consortium. Facebook founded the subsidiary “Calibra”, the initiator of the project, and has so far been able to win numerous well-known partners such as Visa, Mastercard, Paypal, Uber and Spotify. Calibra and the other partner companies form the Libra Association based in Geneva (Switzerland). The Libra Association will operate as an independent non-profit organization and is responsible for the development of the ecosystem. The exact degree of decentralisation cannot yet be fully determined from the whitepaper. Although Facebook is only a member of the Libra Consortium, most other partner companies have significant market power. A centralized framework would entail the risk that the entire system would be controlled by a few centralized parties.

Conclusion: Impressive project with significant risks and challenges
Libra has the potential to achieve impressive benefits within a global, decentralised financial ecosystem, such as reducing the cost of financial transactions (e.g. remittances) and promoting financial inclusion in developing and emerging countries — for hundreds of millions of people. It can be expected that Libra could rapidly reach a market capitalization of USD 250 billion. This would also make Libra a significant buyer of government bonds.

According to the published white paper, decentralization and data security are the project’s priorities. However, further developments in technical architecture and data protection practices will need to be closely monitored to assess whether decentralization and data security will actually be ensured. These factors will have a significant impact on the success of the project. Furthermore, macroeconomic implications also need to be analysed if the project is to be assessed holistically. 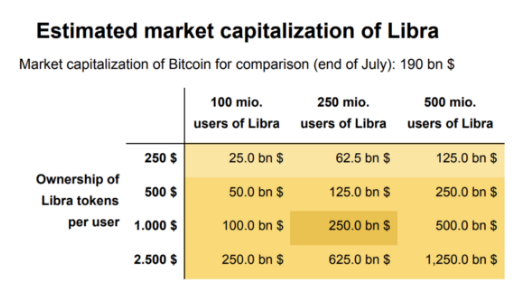